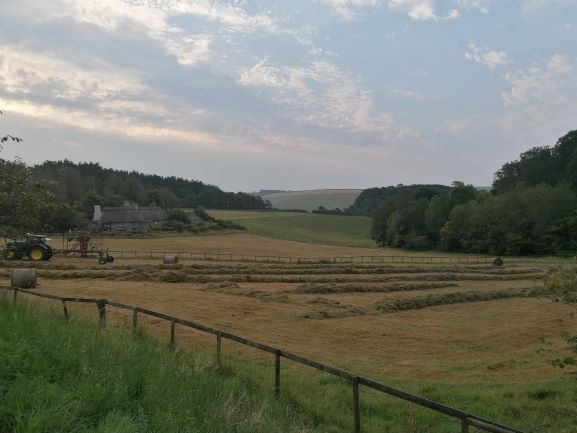 In 2020, we decided to manage Colts’ field next to the garden as a natural wildflower meadow. Until 2019 it had been used for many years to graze horses, with an annual visit by sheep to crop the grass short when the horses moved to fresh pastures. In 2019-2020 it was grazed by sheep until March and then allowed to grow. At the end of June, a representative from Plant Life assisted with an audit of the grasses and flowers already flourishing in the field, and found forty-eight different wildflowers and twelve different grasses. A complete survey list from this Year Zero can be found here.

After cutting and baling the hay in August, we harrowed several areas and sowed Yellow Rattle, followed in some of the areas by locally harvested wildflower seed. This was then rolled in and the following day subjected to an inch of rainfall. The cycle begins again in September with the sheep returning and grazing until late March. A further plant species survey will be undertaken in June, before cutting and baling in July/August. We are hoping that the Yellow Rattle will have reduced the vigour of the grasses and we plan to sow more native wildflower mix in the years to come.

To be kept up to date about future courses on wildflower meadow management contact mothecombegardens@flete.co.uk

For more information about wildflower meadows in Devon visit www.moormeadows.org.uk

The results of  the 2020 grasses and wildflower survey can be downloaded below.