Mothecombe beach has had its annual excitement. A couple of weeks ago on a windy evening with mist rolling in, Johnny returned from the beach asking for three sets of dry clothes and a flask of coffee, as a yacht had been driven aground on the beach and the crew were wet and cold having leapt off and waded ashore.  They consisted of a Polish man, his daughter and grand-daughter who was dressed, unusually for a sailor, in a leather jacket, jeans and high heeled leather boots, topped off by a furious scowl.  Johnny brought them to the house for a drink while we called a taxi and sent them to a hotel for the night.

The man told us that he had bought the boat unseen on eBay and that it had no radio, navigation equipment or lifejackets and only a 2 horsepower outboard motor.  Despite this, he was planning to sail it from Falmouth back to Portsmouth using his grand-daughter’s mobile phone for GPS directions.

He returned to Portsmouth leaving the boat stranded on Mothecombe beach, promising to return to float it off on the next spring tide a fortnight later.  However, our next communication was a text message from him suggesting we buy the boat for £1 as he needed to return to his sick mother in Poland.  Hmmmn!  Shortly after, he phoned to say he was five minutes away and were we going to buy it?  This whole scenario seemed a bit Arthur Daley to us, so we shifted the boat into the water with the help of two forestry tractors (thanks guys, you were  great!!) and it was towed to a mooring in Newton Ferrers for him to sort out with the salvage people.

The following day we had 50 mph winds and huge waves which would have smashed the boat to smithereens.  Kris may have been looking forward to an adventure, but I doubt if he’ll ever persuade his grand-daughter to sail with him again. 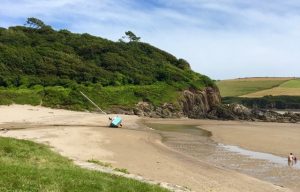