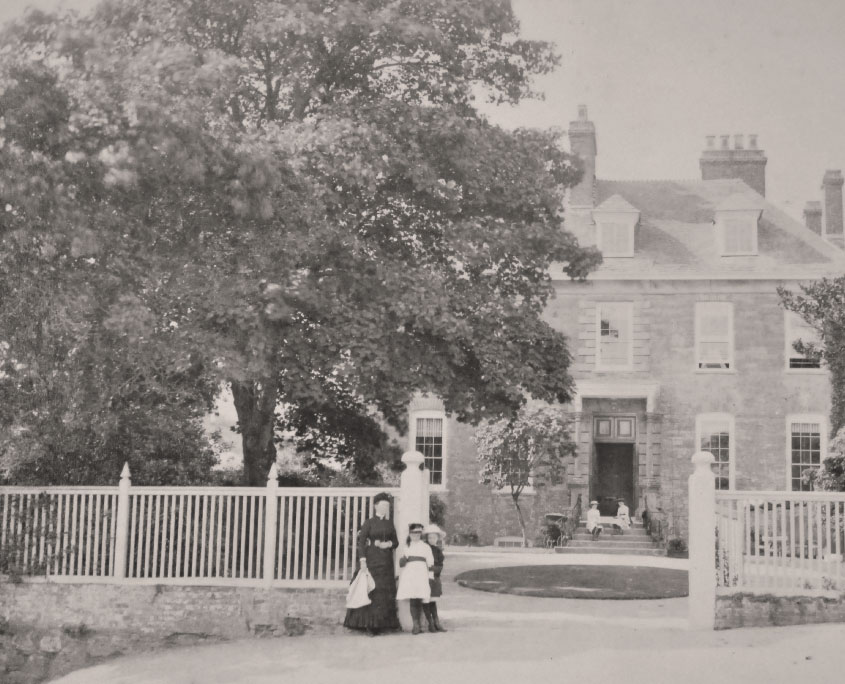 Mothecombe House was built in 1710 and originally had little in the way of a formal garden apart from the walled garden in front of the house. A farm track ran through the cider orchard and woods to the beach. Mothecombe House and farm was bought 1873 by Henry Mildmay whose father-in-law John Crocker Bulteel had owned the nearby Flete Estate. He enclosed walled gardens for growing vegetables and flowers for the house. He also improved the path to the beach and planted tree rhododendrons in the woodlands. In 1925 his son Alfred commissioned Sir Edwin Lutyens to make improvements to the house. Lutyens was also consulted on the garden and remodeled the wisteria terrace to include a bed of agapanthus at each end and installed a small pool and gravel terrace below. He also designed two garden buildings to house the batteries, charged by a generator, that provided electricity to the house; these are now a potting shed and pottery studio.

In 1950 Helen Mildmay continued the development of the gardens, creating the camellia walk through the orchard, and constructed a second path to make a circular walk. She opened up the stream through the orchard, and planted specimen shrubs and trees throughout the garden. She planted the walled garden for maximum colour impact in July and August when the house was filled with guests and the vegetable gardens were filled with fruit and vegetables and masses of showy cutting flowers for the house.

In 1982 Helen’s daughter-in-law Anne took charge after a gap of eight years during which the garden development had stalled. She spent several years clearing and replanting the walled gardens, stream and bog garden, and planted a shelter belt of mixed native species to protect the magnolias, flowering cherries and ornamental crab apples which she added to the existing planting in the orchard. The storm of 1990 cut a large swathe through the woods, and masses of bluebells, foxgloves and campion appeared, and are thriving under a lighter canopy of silver birch, bird cherry, whitebeam and wild crabapple. Thousands of snowdrops, cyclamen and hellebores have been planted along the banks of the woodland paths and many more rhododendrons, azaleas, hydrangeas and acers, have been planted through the woodland garden, as well as some unusual trees such as Halesia monticola, the mountain silverbell tree.

From 2013, the priority has been to host wildlife, in particular pollinators. Two hundred and fifty lavender plants of twelve varieties replaced rows of showy flowers and old fruit bushes, in the walled cut flower garden and form the backbone of the planting, supplemented by bulbs, annuals and perennials. The other walled garden in front of the house continues this planting theme, whilst the wildflowers in the orchard and woodland garden also attract many species of pollinator.

In 2019, John and Lily Mildmay-White took over the running of the Flete Estate and Mothecombe and have started creating wildflower meadows in the horse paddocks around the house and on the wider estate, assisted by Head Gardener Martin Haxton. Mothecombe gardens will be used by the Bumblebee Conservation Trust for bee identification training days and bee walks to survey the existing populations of bees as well as education days for local schools.