Max Hastings in The West Country

The Hastings family have been taking West Country holidays ever since we were big enough to bash a toe in a rock pool and consume a cream tea.   I have since witnessed shrimp genocides at Fowey, weeks of torrential rain at Treen, seething crowds in Salcombe, ten-hour traffic-jams outside St. Austell.

This should not imply that we do not love Devon and Cornwall – we are potty about them.   Like all trench veterans, however, we have shed illusions: about the problems of amusing small children if English weather fails to co-operate; about the capacity of bucket-and-spade holidays for catalysing the destruction of friendships, not to mention marriages.

I look on our annual trips westward rather like Bill Murray in Groundhog Day: we get bits right, but never achieve absolute consummation.

Until this year.   For the first time my wife Penny and I went on our own with the dogs, the children and grandchildren having foolishly gone abroad.   We rented a secluded cottage near Modbury in south Devon, close to one of the emptiest yet loveliest beaches in Britain.  I cannot bring myself to name it; because everybody else who holidays there would burn my effigy.

We know the cottage well, so faced no danger of nasty surprises, and it takes less than three hours to drive there from home.  Heaven knows how, 30 years ago, one endured with small children the via dolorosa to Cornwall’s extremities.

Our dogs ran happily amok day after sunny day on a dog-friendly beach – well away from children and sandcastles, before you ask. The only embarrassment occurred when Ludo the Labrador widdled on a bikini-clad sunbather.

On shore the wild flowers were at their peak, a delight on every stroll through the woods.  We ate delicious food.    The Oyster Shack at Bigbury is a family rendezvous I would recommend to anybody of any age, especially if one approaches it from the low-tide road along the estuary above which it lies.    Penny thought the fish and chips at the Ship Inn, Noss Mayo the best she has ever had, and since she did them twice in the week, she meant it.   It is worth eating at the Ship just for the pleasure of watching the tide ebb and flow in the harbour below.
One day we drove north through Tavistock to the Endsleigh, Olga Polizzi’s famous country house hotel, set amid a hundred acres of gardens on a hill above the Tamar.  The rhododendrons for which the place is famous were in riotous bloom, and we spent a blissful hour walking through the woods and along the river, before eating lunch on the terrace. The staff were boundlessly welcoming, and the whole experience absurdly cheap.  Next time we go, we shall stay.

For ages we have meant to visit the Eden Project, and this time made it. Its glorious exposition of the natural world, especially inside its Biomass bubbles depicting Mediterranean plant-life and rain forests, must rank as one of the great British achievements of this generation. Eden is brilliantly organised and guided from the first car park to last cafe, and a skilful mix of plants and playgrounds an inspiration to any child from eight upwards.   Our only stab of dismay by the fact that at least a third of the adults present were clinically obese.    Eden might include in its educational briefs for saving the planet a few hints about the merits of skipping lunch.

I, on the other hand, took my wife on to Rick Stein’s fish restaurant in Padstow. This was our first visit, and we arrived sceptical about anywhere with such an oversized reputation.   A couple of hours later, Stein could have sold us a haddock rock cake.  I had fillets of sole followed by pollock; Penny ate prawn fritters and sea bream.   Both were from a set lunch menu, and tasted as good as it gets.  The holiday throng in Padstow’s streets can look as appetizing as a retreating Iraqi army, but Rick Stein’s place offered such a pleasing experience that we shall cross England to repeat it.

The best thing about everywhere was the super-friendliness of staff.  It has become a cliché, that all good hotel and restaurant staff are foreign, because the young British will not do service.  That was quite untrue of Devon and Cornwall where almost all the kids were local, and smiley as summer days.

When English holidays work, they are a zillion times better than foreign ones, especially for small children, who hate high heat and know that dusty Mediterranean sand is pathetic stuff compared to good, wet English.    If the heavens had opened, as they often do, we would have had only 20% less fun.  As it was, however, we drove home in a haze of goodwill towards mankind, which the dogs shared.   We have got our Devon Groundhog Day absolutely right at last.    The trick will be to repeat perfection next year.

Max Hastings, journalist, author and broadcaster and once described as being an intrepid writer  –  however on this ocassion Sir Max is rather reticent in revealing where he stayed … any thoughts? 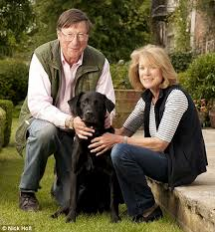