If you go down to the woods today – by Shelley Castle 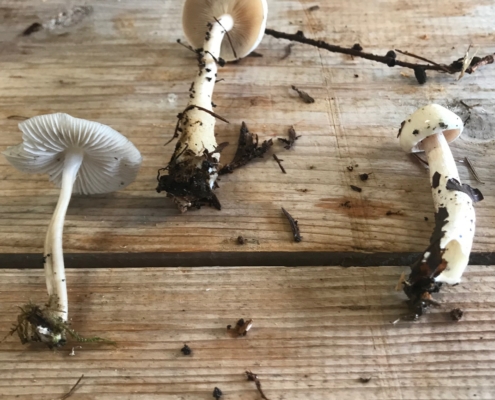 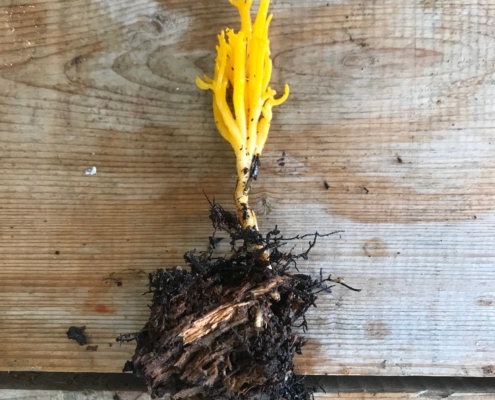 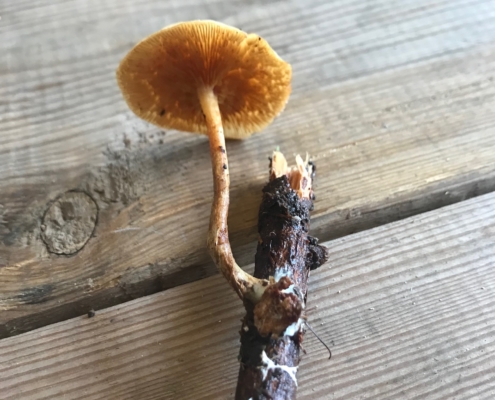 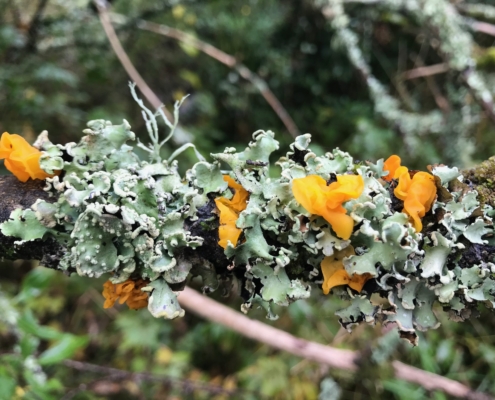 Whilst some of us celebrated All Hallows/Halloween*, a moment when humans are prepared to look sideways at the line between life and death as the light around us fades, a huge variety of mushrooms were busy ‘blooming’ in the ancient woodlands of the Flete Estate.

These beings (somewhere between plant and animal and with a Kingdom of their own, I’m never quite sure what to call them) seem to me to exist in this twilight between life and death.  They are the worlds great recyclers, moving dead things into nutritious matter that supports new life, and as they get stressed in late Autumn, they push up through the earth from their underground labyrinth to produce a dazzling variety of fruits.

Under a stand of fungi lies the main body of the organism – an intricate network of hyphae called Mycelium.  This mycelium body connects trees, sending information (for example alerting the forest to an impending insect attack) and nutrients not only between trees of the same species, but between different species.  In return, it draws down sugars from the trees process of photosynthesis – something the fungi cannot do for itself.

On Sunday 24th Octoboer, Mycologist Dr. Christian Taylor led a committed few out in the driving rain to check out a small area of ancient woodland near Holbeton.  The resulting finds were stunning, and brought into even more vivid life by Christian’s extraordinary knowledge and passion for fungi.  Fairy tales were told, photographs were taken, samples were collected, and we are now experimenting with three jars of mycelium which we hope might flourish in a medium of sawdust and bird seed.

Over the coming months we will continue to collect information and record sightings of hyper local fungi in order to inform a project that is looking at bioremediation* and filtration using biochar and fungi.

And if you are fascinated as I am by forest ecology and all it can teach us humble humans, there’s a new book by Forester Suzanne Simmard called ‘Finding the Mother Tree’ which is well worth putting on your Christmas request list!

* Halloween probably comes from the Pre-Christian Celtic tradition of Samhain, when people more closely connected to the natural cycles would dress as spirits, light fires and enjoy feasts whilst celebrating the thin veil between life and death as the days grew shorter and the light diminished.